A few Brits and the hobby

As you may have noticed, it's been some time since The Brit, The Yank, and the Hobby put out an episode, unfortunately life and other commitments got in the way, so we have relaunched with a new show, A few Brits and the  hobby.

Rob has moved on to his new project, the History to Wargames Podcast, whilst show regular Piers Brand joins us as third host. In this first episode, we take a look at Operation Market Garden.

So head over to A few Brits and the hobby, and give us a listen! 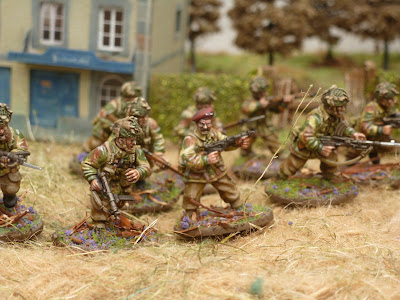 The Brit the Yank and the Hobby Episode 23: Cold War Gone Hot with Simon Elliott

In Episode 23 Simon joins us again, to talk to us about some Cold War gone hot scenario ideas, real world history and equipment, and general gaming ideas for the period 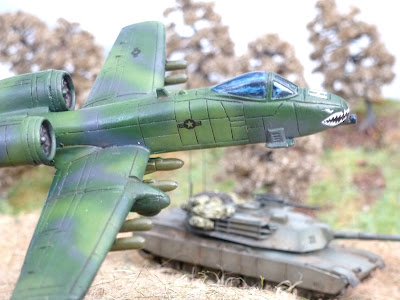 You can listen at the following places

Don't forget to join us at the groups facebook page too, to join in the discussion and share your hobby projects!

Email ThisBlogThis!Share to TwitterShare to FacebookShare to Pinterest
Labels: Brit the Yank and the Hobby 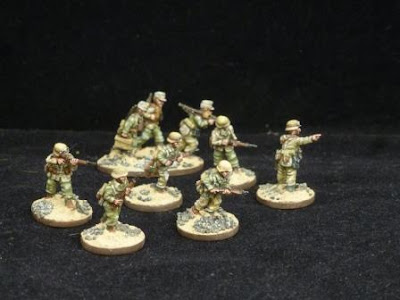 Today I'm taking a look at one of my favourite subjects, the Afrika Korp. Having picked up the new PSC platoon set at Salute, I've been eagerly working on Afrika Korp ever since.


I opted for the platoon set after admiring a few of the figures in blisters, and decided that I wanted them to make up the bulk of my infantry forces in my growing DAK collection. The set contains 39 white metal figures, wearing a mix of steel helmets and M40 tropical caps, no pith helmets are included.

For equipment, the 39 figures include the following,

3 NCO's with MP40's, split across two poses. One wearing a helmet and pointing, the other advancing bracing his weapon. 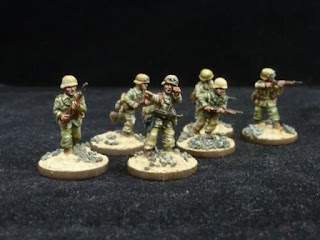 6 machine gun teams. Each team consists of the men, and wear a mix of helmets and tropical caps. These figures can also be freely intermingled to create some variety, and are posed either standing and advancing or prone firing.

Worth mentioning is the separate bipod for the prone gun team, as this adds and extra level of finesse to the finished models. Each team comprises one gunner, and two loader/assistant types. 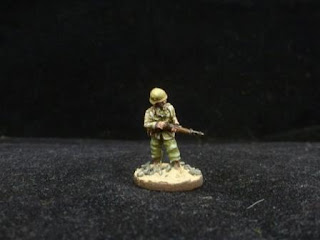 The rest of the set is made up of riflemen, wearing the same mix of head gear. All are armed with K98 rifles, and have a pleasing variety of field gear and skirmishing poses. between  the mix of head gear and poses, I think there are about 10 different poses, and look nicely varied when assembled.


The figures are white metal, and casting was for the most part very clean, though I did have a few mould lines and areas of flash to clean up, however this didn't take long and lines were in accessible places and didn't interfere with any detail. 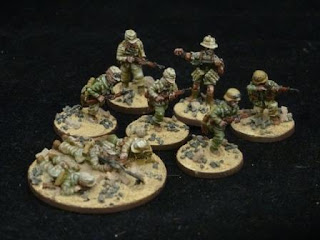 It took me a little while to notice, however several of the figures wearing helmets have their field caps tucked into their belts, which I thought was a great little touch. Unforms are all the standard tropical issue stuff, with everyone wearing long trousers and tunics. 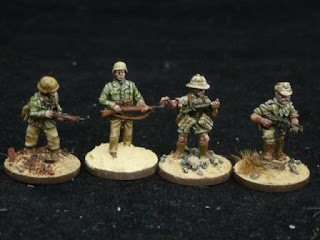 In terms of compatibility with other ranges, the figures are very close to AB in proportions, however they also mix very well with Kellys Heroes, Brittania and Italeri. I do not have any Wartime Miniatures DAK to hand at present. 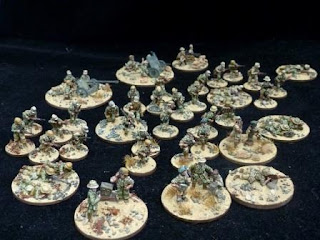 At £40 for the set, I think this is good value as it's provided me with the bulk of the infantry I'll need for my Afrika Korp project, and I'm hopefully the range will sell well and we can see it expanded with command and support weapon options. For now, I've added those elements from Kellys Heroes and Britannia ranges, and find the over all effect most pleasing.

You can get your own platoon of DAK from the PSC website here, and listen to our podcast episode where we speak to one of the minds behind Battlegroup Tobruk, Mr Piers Brand here.
Finally, you can see more of my work or contact me regarding commissions at Volley Fire Painting Service

The Brit, The Yank and the Hobby episode 22 Sea lion 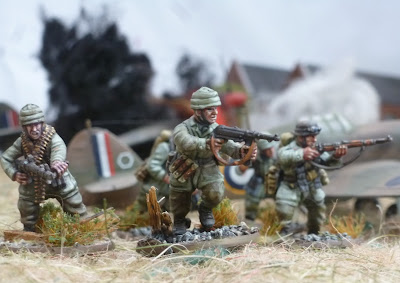 In Episode 22 we are joined by author, scientist and games designer John Lambshead, with his latest work, the Sea Lion supplement for Bolt Action.

John talks to us about some of the history and new game mechanics he's added, as well as the historical basis for what is arguably the biggest campaign that never was.

Come on over to our facebook group to join in the discussion, and drop by Johns blog to see what he's up to as well! I'll have an in depth look at the new book here very soon as well...

Posted by VolleyFire Andy at 08:44 No comments: 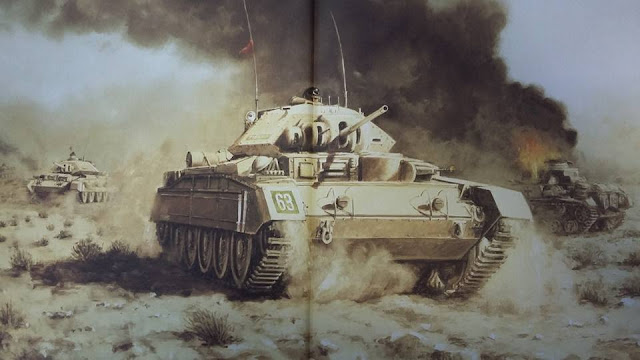 As a fan of WW2 gaming in the desert campaigns of WW2 (You can see my 28mm Perry DAK force here), one of the most anticipated gaming releases for me this year has to be the Tobruk supplement for the excellent Battlegroup rule set. For those yet to be initiated into Battlegroup, I've written a handy introduction to the game. 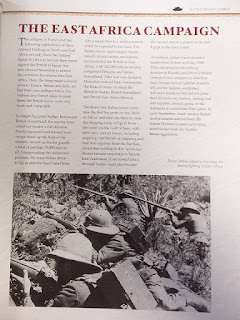 Battlegroup: Tobruk, covers the period 1940-41, from the Italian campaigns in East Africa up to the Operation Crusader and the Gazala line, as well as Operation Mercury and the German invasion of Crete.

Tobruk follows the now familiar format of a big hardback book, consisting of just under 200 glossy paper pages with a blend of photos, art work, history and gaming information. Special mention must be made of the photos however as the lads have put some time into finding previously unpublished photos. 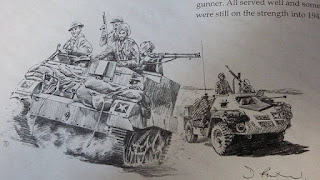 Not massively important from a purely gaming perspective perhaps, but certainly adds massively to the feel of a high quality book.  Bindings feel sturdy too, and the book should stand up well to the rigours of handling and transporting to games. 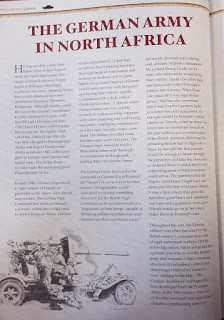 No index is included, however the contents page is very thorough, and the end of the book contains a quick reference sheet, pull out sheets of vehicle cards, and then appendices of references for vehicles and weapon stats making finding the information you need a simple process.

New Rules
The initial part of the book covers the history of the eaerly desert campaigns, before the reader is brought to the special rules for playing games in the desert, to differentiate these from the other supplements. Briefly, these are; 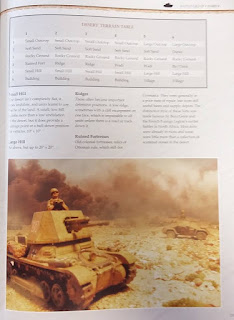 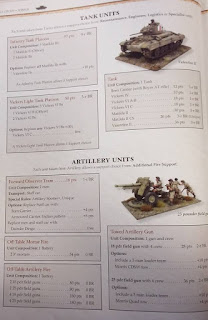 Army lists come next, with lists for British Infantry and Armoured division battle groups, these are similar to those in Blitzkrieg, however come with updates and extra units suitable for the desert war. Particularly exciting (To me) are the addition of LRDG patrols to the reconnaissance section. Amendments are also included for playing the East African campain.

The DAK platoon list is similar to the Blitzkrieg panzer grenadier platoon, though with less half-tracks, and some options for cool toys and lots of machine guns and anti tank weaponry. Options for captured equipment are quite prevalent too, with captured artillery, armoured cars and tanks available. 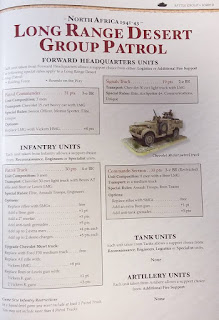 In addition to the previously mentioned British and Italian platoons, LRDG and Auto Saharana patrols also get army lists for light, raiding formations, these are designed to be used in games of 350 points or less. These offer some very interesting and exciting gaming options for light vehicle fun, as well as a scenario for a meeting engagement between a patrol of each.

For Crete, 2 further army lists are included, the first, unsurprisingly covers the 7th Flieger division full of air portable Fallschirmjager options, with a few Gebirgsjager thrown in too for a bit of extra fire power. These are very light infantry forces, but also highly motivated and quite tough. 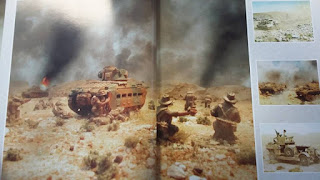 Final army list is for the defenders of Crete, and covers both Cretan and Greek local forces, as well as supporting commonwealth troops. The force has a good selection of artillery and fire support, however armoured support is quite restricted. 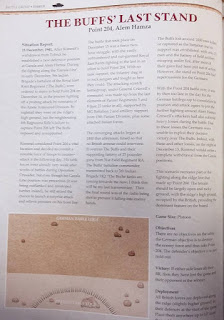 Tobruk comes with 3 scenarios featuring historical re fights for the desert war in general, including one raiding force scenario for the LRDG and Auto Saharans. a 5 scenario mini campaign following the Tobruk siege, and finally 2 more for the Battle of Crete, though the Airlanding scenario and rules could be translated easily into other forces with a little light lateral thinking...

On Episode 20 of the Brit, the Yank and the hobby we chat to Piers Brand, one of the dark and devious minds behind the book, and you can find where to listen to it here. 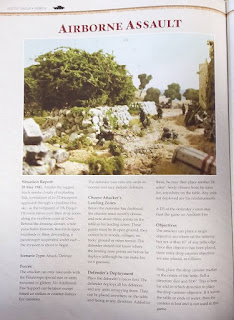 Overall, this is a magnificent book, and a fantastic tool for desert gaming in the early part of WW2. I'm looking forwards to getting some games in, and am currently assembling some 20mm Afrika Korp at the moment...

You can find Battlegroup Tobruk, and the rest of the Battlegroup range at the Plastic Soldier Company site, and see more of my work at Volley Fire Painting Services.

Posted by VolleyFire Andy at 03:20 No comments:

Email ThisBlogThis!Share to TwitterShare to FacebookShare to Pinterest
Labels: 1/72, 20mm, Battlegroup, Brit the Yank and the Hobby, Early War, German, The Brit

This week Andy has been off to Salute, head over to the facebook group to see all the pictures as you listen in. I've sorted them into gallery by manufacture, so you can see all the things I managed to get round to viewing. 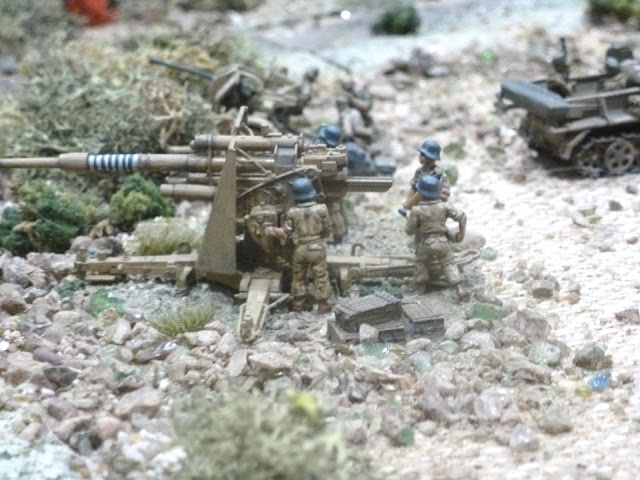 The Brit, The Yank and the Hobby Episode 20, Battlegroup Tobruk

This week Piers from Battlegroup fame joins us to discuss the new Tobruk supplement and talk about all things Italy in the desert.
You can join the discussion at our facebook group, or listen directly to the show at the links below. 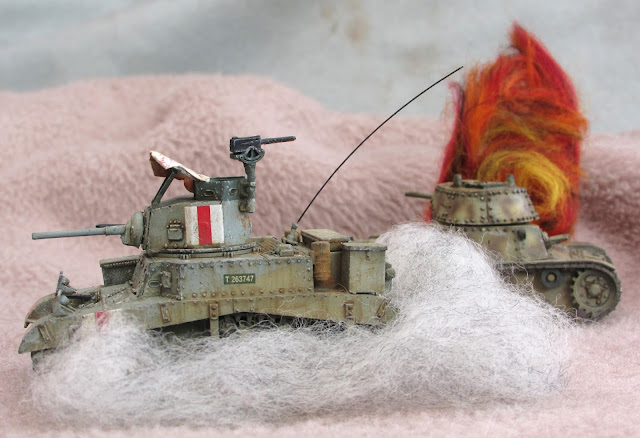 Posted by VolleyFire Andy at 01:31 No comments: